After the successful launch of the Sky Descender playing cards, I have been itching to create another deck that can show off another part of the mystic Asian culture. However, it was very hard to pick a theme among many different elements of Asian culture. Finally, my co-designer and I decided to create the Kasa playing cards. The playing cards set is inspired by the Japanese Noh plays and its mask culture. Kasa means "umbrella" in Japanese, and it is the main inspiration of the card back.

Noh is a Sino-Japanese word for "skill" or "talent." It plays a very major part of the classical Japanese musical drama that has been performed since the 14th century. Usually, the performers dress in traditional costume and wear strange-looking masks during the performance. The box art features 2 different masks depending on the deck: the white mask is a fox mask and the red one is a Tengu mask. 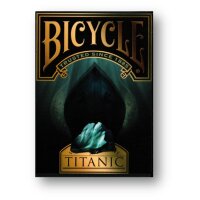 Between the Lines Playing Cards by Riffle Shuffle